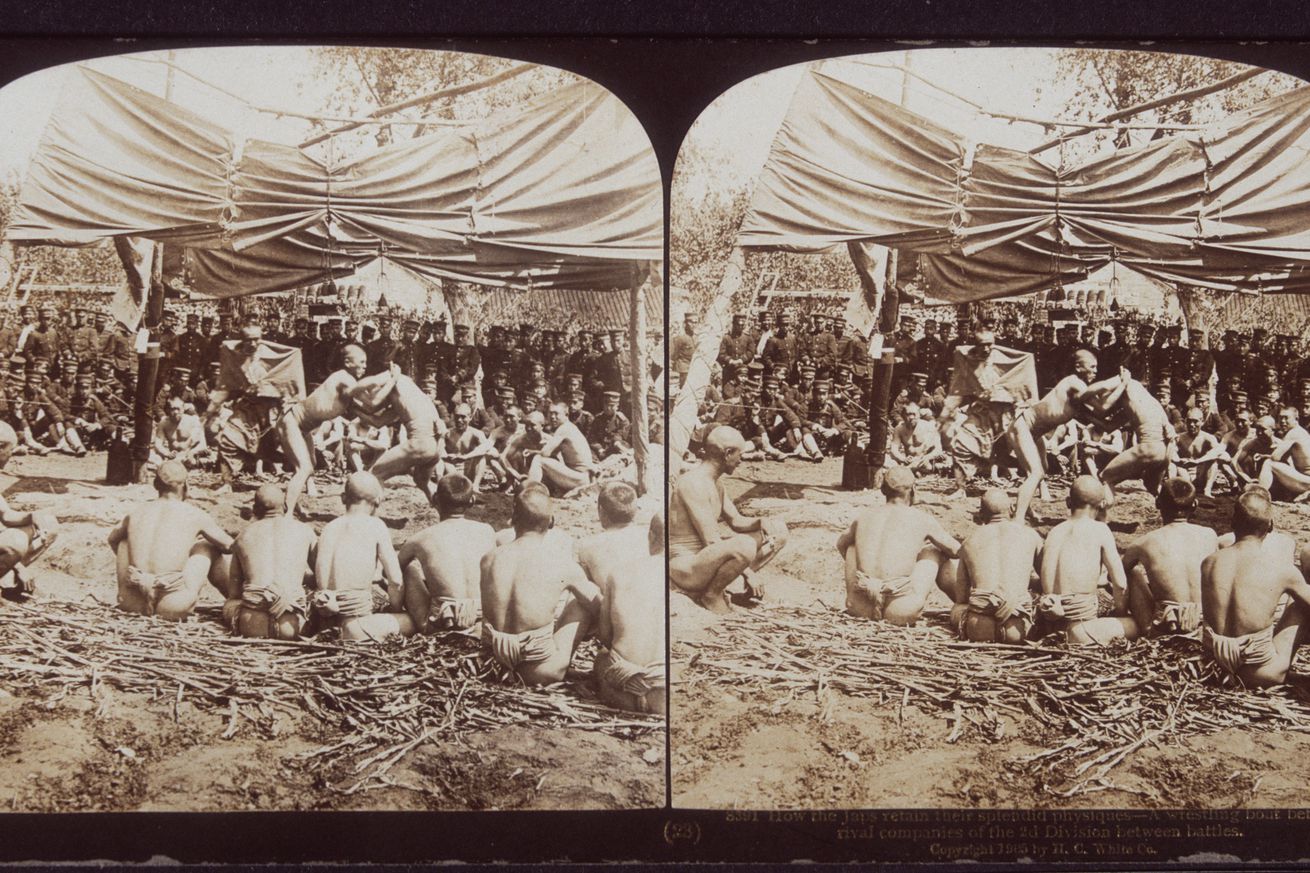 A 100-year-old stereograph shows the ‘gentle art’ being performed on one of history’s bloodiest battlefields.

Long before Royce Gracie exposed the world to Brazilian jiu-jitsu at UFC 1, the ‘gentle art’ was a staple of Japanese traditional martial arts. Jūjutsu is believed to have been developed during the Nara Period (710-794), combing aspects of sumo with various battlefield-tested hand-to-hand combat techniques.

In this image from the vault, we see two Japanese soldiers sparring in front of their comrades. The image, a stereograph that belongs to the Hulton-Deutsch Collection, is labeled as displaying a ‘jujutsu match in Jilin Province, China during the Russo-Japanese War’.

A caption, typed onto the actual stereograph, states the following; How the [Japanese] retain their splendid physiques - a wrestling bout between rival companies of the 2d Division between battles.

The Russo-Japanese war was fought over the region known as Manchuria in north eastern China, as well as parts of what is now North Korea. Russia, which borders Manchuria, had sought to expand their Empire to include the warm-water ports in the Liaodong Peninsula. The Empire of Japan was open to recognizing Tsar Nicholas II’s authority in the area, but only if the Russians recognized their authority over Korea. Russia refused and, after negotiations broke down, the Japanese Navy attacks Russia’s Eastern Fleet in Port Arthur, China in early 1904.

Japan won battle after battle against Russia, on both land and sea. The debuting of weapons like rapid-firing artillery and machine guns meant the death toll for the year and a half-long conflict reached shocking proportions (possibly as many as 160,000 deaths).

It is unknown how many civilians died during the conflict. Historians image the number is terrible, with known atrocities happening across the region, especially involving Russian soldiers who targeted Chinese villagers under the racist belief that all Asians were their enemy.

The bloody conflict ended after both Empires signed the Treaty of Portsmouth, mediated by US President Theodore Roosevelt (who would win a Nobel Peace Prize for his efforts). The war solidified Japan as the military superpower of East Asia and all but ended Russian ambitions of expanding into China. The embarrassing nature of Russia’s battlefield defeats in Manchuria lead to public dissatisfaction with the Tsar, leading to the unsuccessful Russian Revolution of 1905.